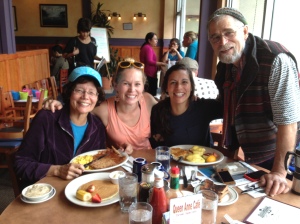 Me, looking like one of the Supremes, with my Mother’s Day gift.

I am overdue for a touch in.  Round 2B has come and gone, so that’s 4 rounds of hospital chemo. The day after I leave the hospital, I need sleep like a suffocating person needs air. Skeleton Woman had her hands full restoring the basic building blocks of daily living before I was fit to see anyone.  Luckily, by Mother’s Day, I’d recovered enough to meet up with Elena on Queen Anne for brunch, never dreaming that Mariya would surprise us as well! The three of them perfectly orchestrated the day’s events so that I was properly speechless and amazed at her appearance. I knew she was coming later this week, but she’d changed her plane ticket to come on Mother’s Day. 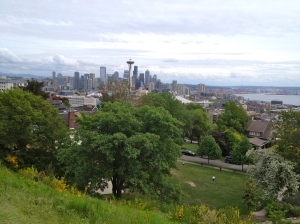 I was very thankful to have the ability to walk down the genteel avenues of Queen Anne Hill with my family, look out over Seattle and the ferries coming and going, admiring the stately street trees and landscaping and just be upright and in the world. We take it all so for granted. I do, even during this illness, I still have to be reminded frequently to be awake and to let the world truly enter my personal walls. I want it to soak my cells. Help heal them with its living energy. But I have to let it all in first.

A little story: Steve and I had been at the hospital for all of 15 minutes when he cajoled me into taking an “untethered” walk in the hallway. There is always a grace period of an hour or so before they get you hooked up to “Herman”, the IV Pole, and your first rounds of hydration or chemo. I was still in my stoic realm, having left the sweet warmth aliveness of the day and exchanged it for the cold sterile walls of the hospital. Carrying myself a little resentfully down the hall, I could feel a cold ball of bitterness inside my chest, and I knew I was thoroughly wrapped in my own personal drama.

A woman came out of one of the shuttered rooms. We have seen her every round at the hospital. I judge her to be younger than me, in her fifties. Her 20-year daughter has the same disease I have. The mom greeted us warmly and told us they were leaving the hospital at the same time we were entering. Her daughter is not doing well. She has not responded to the chemo; her white blood cells refuse to climb back up (mine bounce up quickly) and there are no stem cell donor matches. All of this, she tells us, with a mother’s courage and need to be strong that has soon has me wishing I had Herman to lean on. I feel the threat of tears and I know it is the last thing she needs, so I command them back. With options running out, her daughter will get a cord blood transplant later this month. There is no need to state that it will be chancy but you do what you have to do. The mom stands there dry eyed and strong, I give her a long hug and hazard a few words and we leave her to this Herculean task. 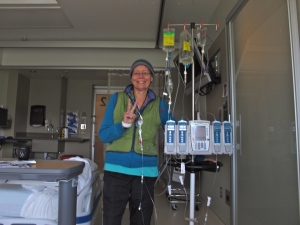 As soon as we rounded the corner, I crashed and cried as openly as I have on this whole journey. In a heart’s moment, I had been taken from my drama to our collective journey.  I was shaken and cracked open by her love and strength and once again, I know this is not the worst thing that could happen to me. By the time we lapped around back into my room I composed myself but the openness in the heart stayed large. People do what they have to do. Courage is common. Love is bigger than doubt.

Later, sitting in a hospital bed, hooked up to getting one of the most toxic Chemos—methotrexate (the one that has to have leuvovorin, the methotrexate “rescue” to stop it from killing you), thankful for anti-nausea meds and Pandora and Bob Dylan, I reflect on “Chemo Brain”. I always think it is a bit amazing that your own chemically damaged mind can reflect about its altered state. I am also on steroids and so my thinking bounces and skids between the most mundane of topics to half-finished esoteric ramblings. I can’t even really describe what Chemo Brain is like, but think of it as a foreign landscape where normal foot trails morph suddenly into conveyor belts going in another direction and the ecosystems of your world have a dream-like quality where things don’t match up the way they used to. Quite Alice in Wonderland. And then there are the big voids you fall into, where essentially you check out, and you don’t even know you are there until, minutes or hours or days or weeks later, you crawl out and hope that you didn’t miss anything too critical (sometimes you do though). I wish Chemo Brain was just being forgetful, I could handle that more easily. 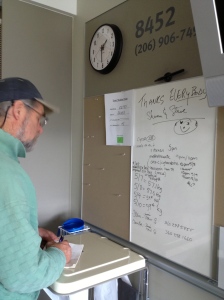 What’s next? I have a virulent disease currently held at bay by strong chemicals, research and the best of western technology. I am right on the hinge of history with leukemia. A few years ago, there was no chance for someone like me. A few years from now, I am convinced that all this chemical bombardment will be replaced with the very research that is rolling out of the Fred Hutchison Center. We should hear today if there is a donor. Tomorrow we meet with the oncologist (for my 5 or 6th spinal tap–I’ve lost track..) and the first of the transplant people. Now come all the decisions before us. Which donor, if there is one, and what kind of transplant. Do they give me a “mini”, which means they bombard me with less poison before the transplant or an “ablative” which means super high dose chemo? Decisions hinge on my age, my health, the weight of research on things like relapse and the incidence of “graft versus host disease”, a term, I fear you will hear more about. Do I go through another round? Round 3 of Groups A and B? That’s another month of this “hit and recover” stage of chemo, then the transplant. Many of the same nurses work both the oncology ward and the transplant ward. Their faces and their responses tell me transplant will be harder than anything I have experienced so far. 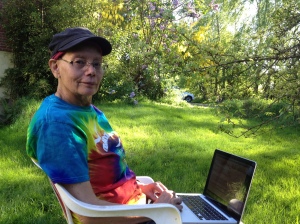 o, simply, I don’t know anything. I will, sometime soon. What I do know is that I feel like a novice being prepared for . . .  something. Without my easy prop of tangled wavy hair, and as my eyebrows and eyelashes slowly disappear, the word “lean” keeps coming forth. I have lost 20 pounds and 6 dress sizes. (I can’t recommend the diet though.) I am lean, in some elemental way I have never known. I can stand on the edge of this present moment and not teeter, even without knowing anything. I never could do that before.

8 comments on “Standing on the Edge of This Present Moment”