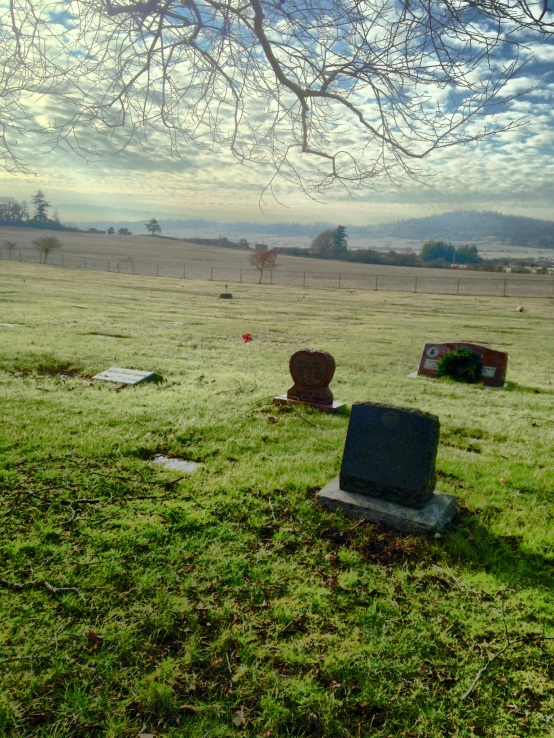 San Juan Island Cemetery, where our ashes will rest.

I am sorry it’s been a long time. I entered the hospital on Martin Luther King Day, January 16. I knew I still had energy that would fade and used that vigor to write a speech for our local Women’s March. Our small town of  Friday Harbor had nearly 2000 marchers (including people from other islands) and speeches afterwards. I wanted to be represented. I will post that speech in the following blog. 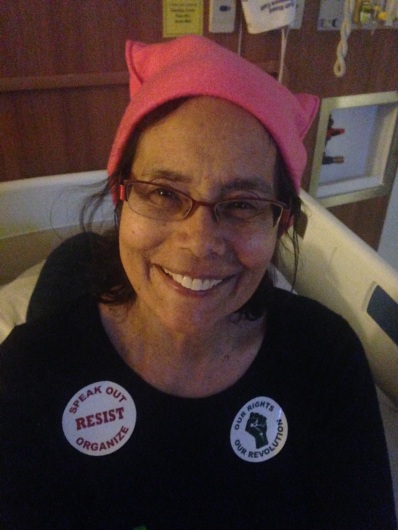 Chemo is cumulative. The last few days are always worse than the first couple. I got the same “Hyper-Cvad A”as before. That’s three different types of chemo, Mesna to protect the bladder from the chemo and steroids. This time they also put a PICC line into me, twice–the first they had to take out and re-do when the nurse who cleaned it accidentally pulled it part way out.

During all of this, I had access to cable TV and it was about all I could do. The stunning changeover from Obama to Trump was so big it filled and saddened my chemo drugged brain. The next day, the amazing Woman’s Marches from all over the country uplifted my heart. Steve took time away to march with friends in Seattle.

I stayed in hospital for a full week. The first spinal tap showed Blasts: (Immature blood cells. Leukemic blasts do not grow and age normally; they proliferate wildly and fail to mature.–from MedicineNet.com). So I had leukemia in my bone marrow and spinal fluid. The race was on to keep it from entering my brain. Every time I had a spinal tap, they took a sample and injected me with the chemo drug Methotrexate, so that it would be carried by the spinal fluid into my brain. The IV method of chemo does not penetrate the body brain barrier. How’s that for chemo brain? I had 5 spinal taps (also called lumbar punctures) in all, 4 at the SCCA after the hospital visit. The last two were clear.

The dance we all dance

They also started me on ponatinib (trade name Iclusig). The primary target for ponatinib is BCR-ABL, an abnormal tyrosine kinase that is the hallmark of Philadelphia Chromosome + Acute Lymphatic Leukemia. It is both astronomically expensive and carries a black box warning (like the risk of suicide warning on anti-depressants). It has huge side effects and we could only hope that my “sturdy” body -(dubbed so by my first oncolocologist) would be able to endure them. It did, mostly… though there was a trip to the ER to rule out chest pain from heart attack (turned out to be sternum pain from the Filgrastim shots I was giving myself to increase my neutrophils). There have been lots of side effects. I’ve lost count. Hand and leg cramps from hell had me climbing the walls when they struck. Headaches from the spinal taps. Low red blood cells that kept me from being able to go uphill even the slightest little bit for lack of oxygen. Stiff Achilles tendons and deep fatigue. Still, I counted myself lucky to still have some appetite and some ability to eat.

My hair fell out. The first time, I had my head shaved. This time, I didn’t. I don’t know exactly why. I do know it allowed me to toss handfuls of hair into the air off the ferry car deck and watch as it handed on the surface of the Salish Sea. I spread more on our property and more again in Seattle. It was like a private remembrance service, like spreading ashes on the body of the earth. At that point, we had no idea what would come next. The odds weren’t great. Even if I went into remission, there was 90% chance of the leukemia coming back.

Just a few vials of blood.

When I entered the hospital, I had 80% cancer cells in the bone marrow. My last one showed less than one percent. That change was from the chemo and the ponatinib. Lucky me, to have just a little disease, because I was able to qualify for a clinical trial where you had to have some evidence of disease. If I had none, they would have zapped me with more chemo, hoping to get every little bit of cancer. Instead on February 15, we transferred to the bright shiny new 6th floor wing called Immunotherapy and entered a trial with CHIMERIC ANTIGEN RECEPTOR (CAR) T-CELL THERAPY.

This is a link to what it is, but basically, many Tcells are harvested. They take the harvested Tcells and teach them to recognize and attack a protein on the cancer cells. So your own body does the work of chemo. In the process, you become a genetically modified organism. And you have a 5 inch straw-sized tube inserted into your neck to harvest the cells (but only for 24 hours).

I will have outpatient chemo for three days prior to getting the Tcells (to make room for the Tcells, they say). But who’s stressing the details? This has a chance of making me cancer free. I will be watched carefully for side effects after the educated cells are infused back into my body. There may be future hospitalizations. But sometime early in April, God willing and fingers crossed, I will be discharged and can return to the island to resume my life.

Something is stirring inside me, deep in my heart. I have the awareness that it  will be slow blooming. I know that because cancer is a busy life and this time we have had the luxury of coming back to the island nearly every weekend.

Audrey, our granddaughter is the light of our lives. So when we are back on the island, she is our center. There hasn’t been much time for reflection. I have thought . . . when I am sitting around getting red blood cells or platelets . . .  that I am back at the table (of life), and what am I here to learn? Or do? Starting with Audrey, it’s pretty clear to me that I am here to stand up for her life and all the young and innocent of the world. As non-human life diminishes on this planet, it is clear to me that I am here to stand up for those who cannot speak. I am here for the sake of the future. As a grandmother and as someone who has been supremely privileged to see the world from the first glacier poppies alongside Denali to the crowded and colorful streets of India.

Because the blooming of what to do next is slow, compared the everyday logistics of cancer, the discovery and telling of it will also be slow. It contains the deepening of faith in the Creator and not being bashful to use the name of Jesus. I have been surrounded with scientists and humanists, but I have always had this faith. It is time to speak it out loud, especially when so many mis-use his loving, powerful message. The measured bloom of recovery, if I am fortunate enough to have it, will contain health as a priority and travel as a means to know the world. It will contain activism on every level I can conduct it without sacrificing health and joy. It will, as always, contain family, friends and community. Our world is deeply threatened. It needs all of us. If we are given life, we need to use it for the good of all. I want to live for the future, for gratitude, for faith, for health and for love of this world.