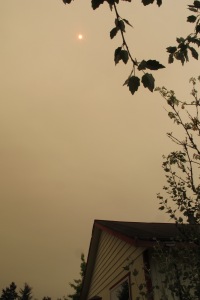 A haunting orange yellow sky appears on the day after the Fourth of July. Fires to the north, south and east. And everyone on tenterhooks about our own possibility for flames. Our little island had a reputation for raining through the Fourth and then drought until late fall rains. BUT. The drought has been here for awhile now. Our snow pack is virtually nonexistent, rivers are dropping precipitously and temperatures are soaring. Our food and our wildlife, especially, are at risk. And our trees. The thirsty trees. On our own land, we are almost in triage mode with the trees we want to thrive and the water we don’t want to run out of.

This is a blog about stress. I am exploring how to live around and with it and not get sick. I thought I would start with one of our community stressors. My conclusion so far: If you are paying attention, you are experiencing stress.

I had a short conversation with a stranger who didn’t know my recent history and I didn’t tell him. He asked me “what my work was”, perhaps curious to answer the age- old question of what we do on these islands . . . I called myself a naturalist, which I still am. It was nice not to be identified with cancer, but also a little weird because had I not gotten sick, I would have had a different answer for him. I would still be working and it would have led me to new places.

Just saying. But I did get sick. Sometimes, I do wonder, what would I be doing… if I hadn’t gotten cancer? It is, of course, an unanswerable question. Right now, I can mostly say I am living life, which is more than I thought I might be doing two years ago, and which should be enough, right? It SOUNDS right, but it is hard to believe that consistently.

For the most part, I feel good. Except for a few nights ago when I threw up 10 times in the middle of the night, drenched in a cold sweat. The next day I was predictably low. I am often just a little sick to my stomach. My cancer markers show no return of the illness. CMV IS back, AGAIN—so my bad night and persistent nausea could be that never-ending virus. Or could it be that I ate too much bread? The only one who doesn’t think that’s a crazy notion is daughter Mariya, my donor, who reminds me that she reacted like that to bread during college . . . bad enough to land her in the emergency room.

What we do know is that my GI tract went through so much trauma that really, I should be amazed it functions at all. I have gained and kept weight well enough to put away my skinny clothes (today— mark the calendar!). Once again, I need to remember that healing is what I need, and only I can really do that, through good food and herbal medicine and other supplements. And Rest. Recognizing that I will always have larger ambitions than I can carry out, not to mention the crazy number of events and causes that go on in this little town, the ambition to rest more is laughably ironic and ridiculously difficult.

Am I discouraged that the CMV is back? You bet. I really am. I hoped I’d vanquished it. But it may come back every time my immune system gets a little weak. I wish I could tell you that I changed everything for the better after being sick. Righteous Shann would always eat well, exercise daily, get enough sleep, never worry and have focused purpose in her life. Real life Shann does these things sometimes. Real life Shann often finds herself floundering, wondering what to do next. Real life Shann does get alarmed when she doesn’t do the right things because she knows that stress attacks the immune system. Then she gets stressed out! And she goes back to doing better things for herself…until she falls off the wagon again. Stop being so hard on yourself say my counselors.

The advice of the day, from everyone, is to reduce stress. But I am deeply sensitive to human-made noises like the intermittent din of the Navy Growlers from Whidbey Island, a sound that has unfortunately become too common in my world. I am also susceptible to silences that shouldn’t be there, like when the buzz of native bees ominously diminished a few years ago. Like many others, I am sensitive to the modern world. It stresses me out. And I worry about the earth. 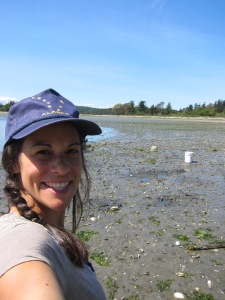 You can’t find an environmental cause that isn’t based on a kind of Holy Worry, which though huge in its consciousness, promotes anxiousness as a kind of soundtrack for your life. If you choose to care, which I do, I care the way a mama worries about a child, with all my heart. I have found two alternatives: 1-develop an “I don’t care” mode or 2-shield myself with meditation, mindfulness, gratitude and appreciation. . . when I remember.

For over 60 years, since I was a young child, I have experienced the destruction of the earth by humans, not to mention the decimation of people by people. I know I participate in it. That’s a lot of consciousness, and I have been fierce about not wanting to let it go.

There is a web site out called “iWorry”. In their own words, “iworry is a campaign created by The David Sheldrick Wildlife Trust (DSWT) and exists to protect elephants by raising awareness of the threats facing the survival of the species.”Without the iworry campaign, and others like it, the Earth, it seems, has little chance at all. It needs people to read about, worry on its behalf and take action.

About 30 years ago, I left behind the disillusioned environmentalist I’d become and deliberately took a different perspective, focused on the immense grandeur of the Earth’s most basic cycles, the astounding spaciousness of the Universe, the quirky and spooky paradoxes of quantum physics, as well as the gorgeous and grounding beauty of the seasons, and the grace and preciousness of ordinary life. This still helps me to function on a planet whose troubles I know too much about.

Fake it till you make it???

So, now I have had acute leukemia in my past, and want it to remain there. I have to remind myself of this daily. I almost died. Do I rest? Sometimes. Sometimes I feel urgent and punchy, as though the tasks must get done, before my energy ebbs.

Stress is a killer. And it is pervasive. So how to keep from dying from it? Stress reduction, also insipid in its terminology, is far from that in action. It is warrior’s work. It is spiritual work. We live in a world engineered to makes us both ADD and anxious. There is very little consciousness in this outer world around us. Not surprising that it is the hardest work I have ever done. How do I look into an red-orange sky and not worry? How do I say no to so many things to do?

Going back into my own writing for clues, I find again the work of the 90-something activist Grace Lee Boggs, who astounded me a few years ago with her message. “We have reached a time on the clock of the world where we need to make a new beginning, a paradigm shift in almost everything thing that we do.” And it all depends on our souls, Grace says, a power that can “make a way out of no way.” What we can do—is grow our souls. That invisible immeasurable task,though nearly impossible to verbalize, is what I am doing now.

Steve and the puppy pile (Mariya, Elena and Jack)

CLICK ON THE "CLOUD" IN UPPER RIGHT CORNER OF BLOG ENTRY.
Follow Do It Yourself Life on WordPress.com
Join 244 other subscribers