So, I’m in the middle of a hot fudge sundae after biking through the magical cottonwood drift on the biking trails along the swollen Chena River in Fairbanks, with friends and one of them asks me “what’s your prognosis?”

When words finally formed, the message was: I don’t really know. Which is true. Not just for me, but for all the medical professionals that I have worked with, as well. They don’t know either. Not really.

I added “and I don’t want to know”, which was and is true, but when I got home, I couldn’t help myself. I endeavored to look it up. The first time I tried, I ended up cross-eyed and confused and had to take a nap after watching an episode of Lost. Then I took a walk. But I came back to it. What I found was what I mostly already knew. I am over sixty. Point against a good prognosis.

If I were a kid, my prognosis would be good. Period. But as an adult, all those years of living come home to reckon with you, and not to mention that you make all these crazy choices (umm… so I suppose watching the World Cup mid-day last week with a beer in one hand and French Fries in the other is an eloquent example of that).

But. Isn’t part of being a kid frivolous? I mean, what good  do you do the world or anything except your giggling self by running through the sprinkler? Or building forts? With my well tuned ability to justify my actions, I choose to think that some of what I am doing now is BEING A KID. Biking with no spandex and no Hard Body Clothing whatsoever, save a helmet. Walking on the beach. Playing with the dog. Points for a good diagnosis.

The literature is boggling, and uncertain. The bad prognosis includes relapse, secondary cancers, other treatment-caused illness, and my old dance partner, infection. Leukemia isn’t “staged”. I don’t have a tumor to measure or a stage to define my illness. The condition you arrived into care is critical, I know that. Point for me. I checked into the hospital having hiked the Grand Canyon two months earlier. True, two weeks or so before diagnosis when I really felt tired and had no idea why, I mostly hung out on the couch watching Game of Thrones . . . but I had no other illnesses. Not many regrets. Willing to accept angels of any kind. I love to walk, I live in a beautiful place full of nature, I have fabulous friends and a big goofy dog, not to mention a close-knit and wonderful family. Surely those are all good points to even out the age factor. 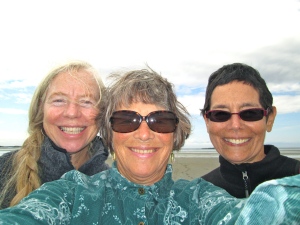 But I can’t get too carried away. After all, these were all in place when I got sick in the first place. So, I asked my oncologist today to answer the prognosis question for me. We had just been discussing my new propensity for sudden bouts of vomiting, not often, mind you, but unexpected and powerful. And CMV numbers are back up, as well as lymphocytes. That’s one of the several white blood cells which can go high if you have an infection… or leukemia.

Simple, eh? Everyday, I take 50 Mg. of Dasatinib, which has been developed to selectively inhibit the Bcr-Abl tyrosine kinase. And my latest test, called Bcr-Abl test tells us everything looks good–or at least, the rise in lymphocytes don’t indicate a relapse. This is after my primary doctor and oncologists got very nervous. But the test says it’s infection (to be identified)—this time—not cancer. You could lose sleep over this. Or you could rely heavily on Story to distract and heal, as I have.

My one-year anniversary of the stem cell transplant is August 21. Then I will say one year cancer-free. And God willing and fingers crossed, I will have a second and more years of being cancer-free. I won’t spend much more time on the prognosis question because, quite frankly, it is a point against me. It takes away my ease of mind and gives me worry. I don’t need that. I feel pretty good most of the time, except for those times when I don’t. Good enough to go hiking in the Cascades for 5 hours and feel fine afterwards. Enough to be front and center to mountain wildflowers and glacier cirques, enough to do yoga outside with digger bees and bullfrogs and summer sunshine. Enough to see orca whales pass on the west side and a double rainbow mark their passage. I am so grateful for these moments in life. Gratitude. Point for. 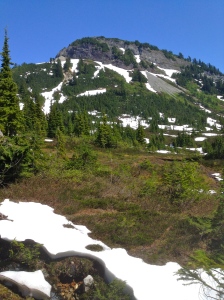