We are very nearly home. Now in Olympia, we will be home on Saturday, and very glad of it.

Before we went on this journey, there was a song that I played over and over, usually a sign that I am identifying with its message. I was needing to go on the road. Didn’t think much about the El Camino and where it was or what, but now I know. Highway 101 and other parallel roads, linked by Missions, Presidos and towns—600 miles worth from San Diego to Sonoma County.

I’m headed out to that Mission Bell
Gonna wash my soul, gonna get it clean
Heading down the border road called the El Camino 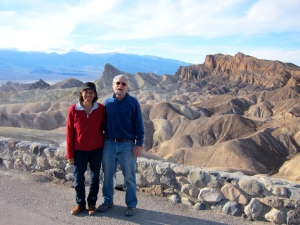 I needed the open road. I can’t tell you exactly why. I wanted to wash my soul. Maybe it was years of underfunded jobs that could never gain the purchase of stable funding. Maybe it was the lightly called and deeply felt empty nest syndrome. Maybe it was saying goodbye to both parents and feeling my own age creeping up on me. Or maybe its just a few too many days spent mostly indoors last winter.

This song, by Mary Chapin Carpenter comes closest to saying it.

Life astounds us in an instant,
Changing all we know.
Blink just once and then you’ve missed it,
all that you can do is watch it go.

Chorus
I want to feel what the wind feels like,
I want to go that high.
Feel no fear instead of being down here,
Holding up the sky.

I found myself between two lifetimes, the sunset and the dawn.
I reached up and took the lifeline
Offered up between here and gone.

We were in California for a month.
Now, as we approach the Northwest in the rain, it already seems like a dream. 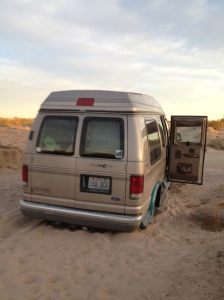 Our first starry night found us stuck in sand up to the gunnels of our van.
Our last day, we woke up in fog, in a meadow full of Roosevelt elk north of Eureka.
We took that old van from 282 feet below sea level in Death Valley and over
the Sierra pass at 7, 382 feet, right through the 5 feet of new snow fall, to celebrate
Christmas and Solstice 2012 and my birthday at Mariya’s home in Tahoe.

We froze our fannies in San Diego during the California cold spell . . .
But when it broke, and the days bloomed into the seventies, we donned shorts at Big Sur, watching breaching humpbacks and migrating gray whales. 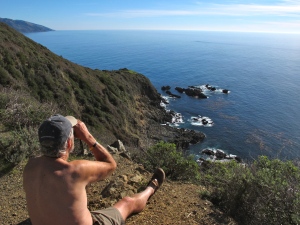 We marveled at the silence of the redwoods,
Watched a pup die, in the wilderness of elephant seals—

Studied the surfers at Malibu,
Walked in mountain lion, tick and rattlesnake country, 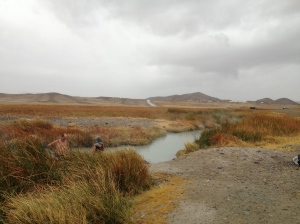 We touched hot springs that touched our lives,
Visited old friends and family, made new friends,
Sampled hostels, sought dog-friendly beaches and watched many sunsets.
So.
I guess that was the opposite of holding up the sky.
You know, down here on earth, holding it all up.
Making a habit of doing that, day after day.
I guess washing my soul meant taking the lifeline offered up between here and gone.
That is, as we discovered, sometimes—hard. 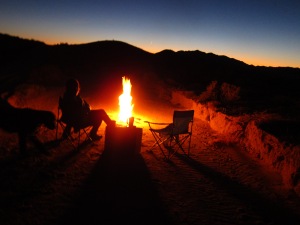 We learned what winter is to the body when the dark cold curtain fell at 5 PM and didn’t come back up until after 7 AM.
And there was, often, no place else to go. We just had us and the van.
Sometimes, this was giddy essential living.
Sometimes it was plain gritty.
We observed that an evening with light and warmth was precious.
And that being on the road was to be prized.
The two realities existed side by side in our world. Knowing both felt like a privilege. 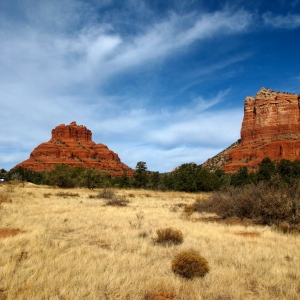 I wanted to feel what the wind feels like. Being too safe in my world wasn’t giving me that feeling. At the same time, really knowing what the wind feels like makes home more precious than ever.
Hard times are a dime a dozen.
Good times are made by sanctuary in a big, often raw world.
Blessings to all who gave us that sanctuary.
You were friends and family who took us in, and showered us with hospitality and friends who sent us support and home greetings.

You were strangers who went out of your way to invite us to your world and who pointed the way to free parking areas, drew us maps so we wouldn’t get lost, and who co-created experiences with us that we won’t soon forget.
You were people we will never meet who made the trails, told the stories, preserved the hot springs, and created and protected the public spaces we enjoyed.
You were the servers at restaurants and bars, the gas stations and a myriad of other roadside places who gave us a kind smile and the helpful energy to speed us on our journey.

You were the Pacific Ocean, our constant companion for many days, the red rock Canyonlands, the deserts and mountains, rivers and the sunlit landscapes that made our hearts sing. You were the deep and extraordinary sacred places of America that were entrusted to us. We will sing your praises and encourage others to find your beauty and keep you safe for the generations to come.

You were a simple 1996 Ford Econoline Van that took us to all these experiences. Gratitude.