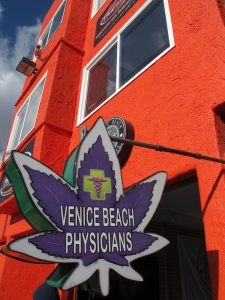 So, we are in Venice Beach. And Jack has just taken a poop on the grass and I am bent over putting it neatly into a little baggie. And a burly police officer motors up so fast I almost drop the precious nuggets and shuts off his engine. I scroll through the possible things I could get chastised for, “but Jack is on a leash’, I think and “I am picking “IT” up”.

“That a labradoodle?” patrolman asks eagerly. I smile and nod. We get asked this many times a day.

“Nice,” he says and motors his big-ass motorcycle away. Yep. That’s what it’s like walking the dog. Reminds me of when I walk alongside the daughters, where I am invisible and all eyes are trained on them. 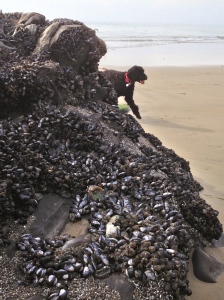 Okay, while I am on topic, I will now refute the oft-issued challenge by said daughters that Jack is the “most photographed dog in the world”.  Perhaps they are a bit jealous but we really do love them more than Jack. That said, the boy deserves mention. He has had some great fun adventures but oh my, he has had a lot of things thrown at him. He’s been attacked by Chihuahuas (and many other little dogs…doing things that a big dog could never get away with), rushed by pit bulls and made “friends” with Great Danes100 pounds heavier than him. Jack has had cactus in his paws, ticks in his skin, been startled awake by marauding raccoons, then told to be quiet and go back to sleep, asked to walk straight up and down slick rock cliffs, walked the streets of Las Vegas and Venice Beach, amongst many other places— from Death Valley to the Temple Square of Salt Lake City. Occasionally, he’s scared people with his size, but more often delighted people. He’s slept a whole lot of nights in the van alone and a whole lot more with his two humans, scrunched up into his small space as we step around him, never flinching from the things that drop on him. He’s eaten pistachios every evening at our own version of happy hour, floundered in Tahoe snow over his head, galloped on beaches, been confused over times when it was okay to chase squirrels and times when it was forbidden, stayed in the Grand Canyon dog kennel, lounged in hotel rooms, and sat around many campfires. He has been an amazing companion.

From day to day, our human perspective of the trip changes. We have reached the end of the travel south. The road warriors have become road weary, and our talk turns more often to home than to travel.  We haven’t forgotten: it was the NW winter climate that propelled us into this trip. Travelers know how much the daily weather matters to their moods and ability to do things. Last winter, on days when I could not remember the color of the sky beyond the dense pewter cloud bank, I wanted light and access to sun more than the comforts of home. Only now, after weeks of travel, has this drive wavered. Ironically, it is an unusually rainy and cool winter in California. Here, the sun is high and warm and bright at its zenith. There is a gleaming luminosity to the days that still feeds our hunger for it. Soon enough we will be headed north, to good friends and to our good home in the Salish Sea. This will have its own warm radiance. And the sun has rounded the corner of winter and is on its way back. What a miracle.

I never really explored California. It is more than worthy of all the superlatives that portray it. For all of you who have been here many times, I can’t to begin to try and describe it. To call it favored and gorgeous seems laughably obvious. I grew up in San Diego but left when I was 18. Ask me about Oregon, Washington and Alaska, fine. I know them. But not California. Many of you have explored and experienced more it than we will on this trip, so what to say…?

We can’t pretend to be suave about it. Steve and I have been tourists here like all the vacationers who crowd our San Juan Islands in summer. Now it’s our turn to gawk and marvel. We stared so long at 28,000 Monarchs fluttering and clustering for the night in the long rays of the setting sun that my neck took awhile to work out the resulting spasm. A small patch of 800-year-old live oaks, huge and twisted and gorgeous, gave us a hint of how California used to look.

The night farmer’s market in January in SLO (San Luis Obispo) was nothing short of astounding, a rainbow-colored profusion of fresh vegetables and fruits, nuts, berries, and dates; all grown locally. The wineries and vineyards of the Edna Valley, and Santa Maria valleys, vast agricultural fields, stunning beaches—seriously, I don’t know where to start. I have been dazzled by California’s diverse splendor and made speechless. Just kidding, so don’t get excited. 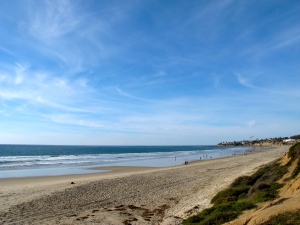 We made it all the way to San Diego, where I was raised. I had a posse in those days, and the four of us rode fat-tired bikes and swam in the Pacific Ocean as our home country. We galloped horses on open slopes that now are covered with homes and businesses. The vacant lots, fruit-tree-studded back yards, and big canyons with their magical springs and life-giving seasonal ponds were the center of our world, along with the sandy beaches and secret coves of our shorelines. I hadn’t been back for over 40 years. Without a guide, in my old friend Robin, I would have felt adrift in a city I had never been to before, shining and interesting, but without these landscapes that had been my bedrock. Even the San Diego Zoo, and Balboa Park, the Serengeti and wilderness of my youth, felt domesticated and smaller. 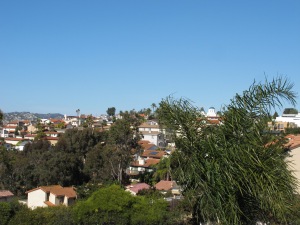 This, I think is not a unique experience, to go “home” and find it smaller and tame. Some of it is because we were smaller and the world more open, quite literally, in terms of humanity’s footprint and sheer populous weight. Now I feel the edge of my neighbor on the border of my own space. Then I felt… a spacious opening around me, populated by many creatures who were very real and not human. These places of my youth now exist only in my dreamscapes. Now that I have another vivid confirmation of that, I want only for those dreamscapes to remain as testament to the worlds of beauty that lived alongside me, that nurtured and fed me and taught me.

Anyway, that’s where we are. Road weary. Soaked in beauty. Tough. Hardy. Tired. Ready to go home, almost, but not quite. Every day, we experience the best of all times, and the worst. Every day, I find out that good things come in flashes, when you set down the wariness of your own little world and let someone else’s in. My favorite moment on Venice Beach was when I stopped when offered a “free” CD. I looked into the face of a Jamaican man. It was a face I liked. I took the CD. He put the head phones on my head and his own reggae music played warm into my ears. “It’s my first CD,” he told me proudly. He asked for a small donation. $5 dollars later, I walked on, smiling. Best five bucks I ever spent.