It’s been awhile since I’ve blogged. It took time to come back to this page. On a sunny Father’s Day celebration on Orcas Island, I caught a chill that felt like it was floating around looking for something to do. Once that chill settled in, I couldn’t get warm and then I went down like a felled tree. Why? I don’t know. My immune system has been getting stronger and older. The only thing I can think of is that Mariya’s immune system had never met that mean little bug and did not have the resources to fight it off.

Just before the chill set in

Anyway, after that initial chill, I just kept getting sicker and sicker, not eating or drinking much, as wave after wave of fevers and cough spasms kept me down. Finally I knew with absolute clarity that I had to go to emergency room, and Steve drove me in. Within minutes, I understood how sick I’d been. There is a tendency to hold on to the idea that “it will pass” for longer than is wise. My blood oxygen had dipped into the low eighties (high nineties is normal) and I was completely dehydrated. The nurses told me I wasn’t making much sense. Without ado, they admitted me to our small local hospital, put me on oxygen and IV fluids, and gave me the bronchodilators I needed to quell the continual coughing spasms. Double pneumonia, they said. We can see it on the CT scan. Two days later, I was released.

It was a sobering recovery. Anyone who has recovered from pneumonia will tell you the same –it is a long recovery. Four days after the hospitalization, I recognized the symptoms of PTSD. The experience of being so weak and sick and the smells and sights of the hospital, though welcome and efficient, had thoroughly traumatized me. My soul, along with my physical body, needed healing afterwards not only from cancer and chemo but from all the serious attacks of illness I have experienced since. The good news is that I did heal. The emotional and physical scars are mended. I am back to weight training and walking and socializing. But I know how complicated and fragile the human experience of “wellness” can be. 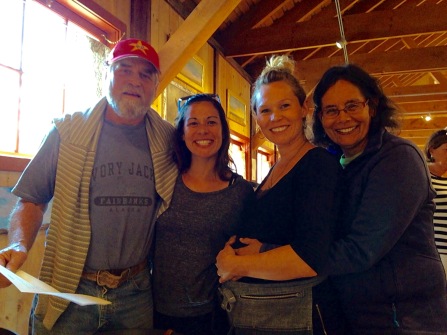 Family Picture, all five of us

You never think about your elbow until it gets injured. That’s exactly why gratitude can’t be an after thought. You never know what’s going to happen. The only way to be ready is to be grateful. Cancer has been a hard teacher but I am appreciative for the education. Never take your life for granted. I turn three on my re-birthday on August 21, by the way. How fun is that?

Making a shift— here it is, August. This is harvest season. We harvest from the seeds we have planted, whether they are broccoli or inner plans, desires and intentions. For me, I have a little reward now for facing up to metabolic syndrome and not just saying “well, that’s the doctor’s job”. If I had, I would now be on several medications for life.

Maria’s sculpture: the stuff that’s behind me..

I meet so many people who have it and don’t know because no one is connecting the dots. To cure a syndrome, you have to recognize the symptoms you have are not occurring at random. They are related to each other. And you have to go after the root cause, which is handily contained in the name “metabolic”. In other words, your metabolism has slowed down, and that’s why that little fat line has started to live around your middle. If you keep eating the way you always have, you are in trouble, it’s that simple. The cascade of bad effects, starting with high blood sugar and high blood pressure will cascade into high cholesterol and triglycerides.

These highs, allowed to go their own way, will lead to diabetes, congestive heart failure and heart attacks.

Here’s the first part of my Rx for this pernicious syndrome. First and foremost: exercise. Yes, I know that’s on everyone’s list. It’s like asking what do humans need to survive? Well, everyone would have air and water on their list. Exercise, which I prefer to call movement, is on every list on the road to getting healthy for the same reason. My naturopath advised me to keep on weight training. She said “don’t regard it as optional”. Weight training increases metabolism for hours after the exercise. That’s a pretty good deal.

I have brought my blood pressure to normal after several bad side effects from medications. I’ll tell you how in the next blog.

Natalia’s Poppy: food for the soul

Leave a Reply to Alice B. Acheson Cancel reply