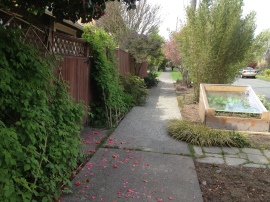 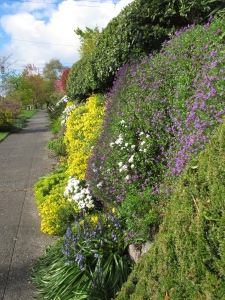 I have started this blog entry three times, wondering what to say. Ended up with so much to say that I will be merciful to you and break it into two parts. There is not much to say about the last stay in the hospital. It had all the same qualities as the last time. Hard it is, there is no getting around it. I owe my life right now to the medical staff at UW Medicine, and the Seattle Cancer Care Alliance. To the nurses, especially, I bow with respect and deep gratitude for all that they do and endure. No matter what I say about the rigors and sometimes, the horrors, of being under the chemo “therapy” regime, I cannot deny that without it, I would not have lived to see this budding spring.

Somehow we thought that chemo was the main event of this disease. But it’s not. It is the stem cell transplant (which I believe has largely replaced the bone marrow transplant) that is the ticket to future health. Chemo is the hammer that takes the disease down. Transplant ensures the success of the endeavor by giving your body a new immune system.

Stem Cells, the givers of life

We had no idea when we checked into the hospital in late February of the startling and complicated world of stem cell transplants. That seemed far away and all of our energies were concentrated on getting through chemo, not to mention setting up a whole new world in Seattle. When the process of trying to find a stem donor began, it came with a bang, with a rush of new information and not a whole lot of help from any quarter in actually sitting down and explaining the total intricate procedure.  If I were German, my chances of finding a match would be great, as so many of them sign up. But this is where the complex dance of my globe trotting ancestors steps in. Turns out being partially Latino or Hispanic—a population that doesn’t have very many donors—mixed with Scottish/Irish/English—the very genetic pieces that make me “me” lead to a very small pool of potentially qualified unrelated “Full match” donors, on the scale of 10/10. Then they have “mis-matched” donors, meaning that they match on everything except one allele, put that puts your match to 6 to 9/10.

At the same time, breakthroughs in using cord (umbilical) blood from delivered babies is making news—miracles, really. At no cost to the family, and no obstacles other than donating the umbilical cord which is normally discarded, people of all ages who had no donor matches—and therefore no chance to live—are getting successful transplants. So, when the time comes, I could be given life from a baby. This thought makes me smile, though it is not the stem cell team’s first choice. It truly is a remarkable time for a disease which children and adults share. When my droll Swiss  Doctor called me sturdy, in terms of taking the chemo with no game changing drastic effects, and my daily walking, it also made me smile–though all that can change in an instant. I hope for a new sturdy immune system, like my old one, as they will kill mine off and replace it it with a new one.

So, I think—this is what they don’t want to even get into in those first desperate days to kill the leukemia with the chemo arsenal. You couldn’t take it in. And it all the uncertainty and possible impediments could make you lose the belief that all this ghastly stuff you are going through will lead to the place you want to go. Now they want it on a fast track but that still means 1-2 months before all is said and done. And that’s not counting the recovery, or the possible complications.  Now the one thing I know as the days roll by is that  . . . we just aren’t going to know until it’s happening.  One day at a time. When the world is fueled mostly by planning and calendars, living one day at a time has the effect of creating a time out of time. I walk slower, and observe more these days. Knowing how much injury and waste is aimed at this fair planet of ours, I also know for sure that the faster we go, and the more mindless we get, the worse it is for the planet. Thích Nhất Hạnh talks about touching the earth gently and mindfully with our feet. Not a power walk.

I keep coming to the same conclusion: This is not the worse thing that could happen to me. Quite simply, imagine being the parent of a twenty-something who has my condition. I’ve met two. And then go from there to all the other uneasy worse scenarios your vivid imagination could cook up. Anyone with knowledge of the world knows that there are far worse situations that could confront a person. And I am left with a single astonishing and obvious truth. Life isn’t safe, it doesn’t come with a guarantee or a warranty and all the seemingly healthy people walking around me are at risk, all of the time. Death awaits everyone. And we mostly act like this isn’t so.

Part Two to come tomorrow. It’s a lot to take in.

11 comments on “Stem Cells, the Givers of Life”